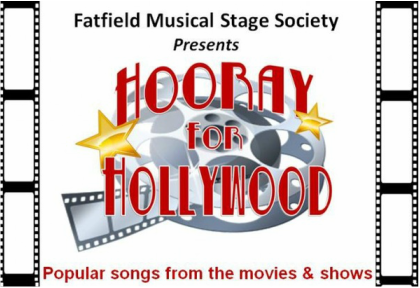 It’s always a pleasure to visit such a friendly society, and this visit was no exception. Based around music from Hollywood classics, the concert featured all eras of the film industry from the early years with numbers from the Jolson Story, Top Hat and Follow the Fleet, through a July Garland Tribute to modern blockbusters of Les Miserables. There was also a section entitled “Soloists’ choice” which gave opportunity to society regulars and invited guests to shine.  Featured in this section were Nick Thompson, Sarah Alcock, Barbara Simpson, Bethan Waller, Joan Hunter, James Forster, Ron Monaghan and Peter Johnson.  Although each soloist excelled in his or her own choice, perhaps it would have been better if this section had been broken up and interspersed with some choral numbers?

During the second half once again there was the same formula, which included children’s classics from Oliver!, Chitty Chitty Bang Bang and Mary Poppins.  Finishing the concert was a specially arranged medley of Rogers & Hammerstein music which was a joy to hear.

Set was simply dressed with glitter curtains and tables, although given the limited space did look a little cluttered at times. Costumes ranged from modern clothes to formal wear which must have caused performers (and audience) problems given the unusually hot conditions both inside and out the centre.

Each soloist and choral number was clear to hear, and MD Colin Galley controlled the tempo well, ably supported by Bob Chicken on the keyboard.
Well done to all at Fatfield for their summer concert, and I look forward to The King and I next February.