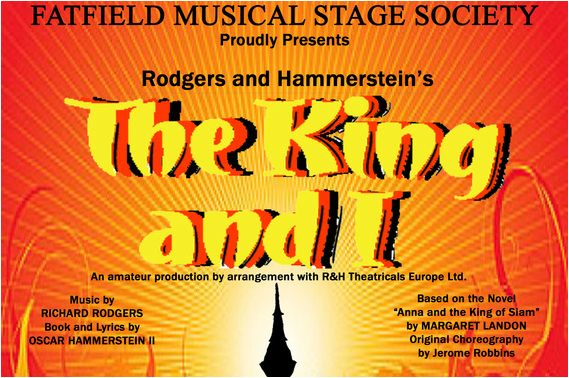 ﻿The King and I
Fatfield Musical Stage Society

Fatfield used great creativity to convert a school hall into a theatre with excellent use of space, and the orchestra being housed behind the playing area. The basically single set was well dressed, and clever use of props and lighting created alternate playing areas.

The show was well cast, with some powerful acting and singing performances. The children were delightful and very well drilled, with that extra something coming from William Telfer, as Louis, and Ross Norman as Prince Chulalongkorn.

Lawrence Chadwick, as the King, was powerful and commanding with a great accent. I very much enjoyed his portrayal of the character. A touching and controlled performance, with beautiful singing, was given by Sarah Alcock as Anna Leonowens, while Anne Taylor was super as Lady Thiang, being poised, powerful and regal. Bethan Waller was a very beautiful Tuptim. She looked and acted the part with confidence, and had a perfect vocal range and tone for the character. She was ably partnered by James Foster, as Lun Tha, who had a lovely voice and gave a sincere performance.

Nick Thompson was a good if rather young Kralahome, and it was good to see Fred Piggford  back in harness as the cultured Sir Edward Ramsey. The Small House of Uncle Thomas was well portrayed with good movement and characters, and the ladies chorus looked great and added to the authenticity of the show.

Congratulations to everyone involved in this great show.
﻿