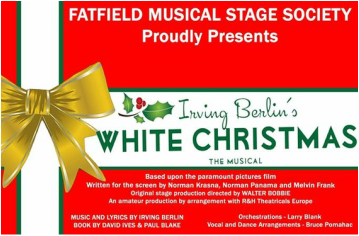 Fatfield Musical Stage Society’s Noda North Amateur Premiere of Irving Berlin’s White Christmas proved to be a smash hit before a packed and appreciative audience. The Society could not have chosen a better way to celebrate their 65th Production.

With restricted stage facilities which meant that the cast had to perform with the orchestra behind them and use a bank of monitors to follow the Musical Director it did not detract from the performance, and it was a delight from start to finish. It was apparent that the cast were enjoying every minute.  Everyone is aware of the plot line of the film and the stage production follows it, in the main, with a couple of additions which give fuller roles to some of the characters.

With the limitations and reduced facilities available to her, Director Ann Chadwick was imaginative in her direction of the Show, and used her expertise and well versed stage craft to bring out the best of the responsive cast. I particularly liked the clever interpretation of the iconic snow scene finale, and how the audience was drawn into participating in the singing of “White Christmas”

Under the Baton of Peter Forster the Orchestra too played its part in bringing the show to life and, as with all of Peter’s orchestras, the music rattled along in fine style.  Complemented by a fine chorus and an equally impressive dance ensemble under the control of Carole Chadwick, the Principal line-up was excellent.  You can always rely upon Lawrence Chadwick to give a solid performance and, as Bob Wallace, the former Broadway star turned Entrepreneur, he again delivered in this pivotal role, particularly his renditions of Blue Skies and White Christmas. James Forster, as buddy Phil Davies, is a new name to me, but I believe one to watch. He was equally as good and with the ability to dance well, he has another weapon to add to his already impressive armoury of singing and acting.

Bernadette Trotter and Amy Bagnall played the joint leading lady roles of Betty and Judy, the Haynes Sisters, and brought sensitivity, humour and a not an inconsequential amount of fine singing and acting to their respective roles. They were ideally cast and were perfect foils for each other.

The Society could also call upon the experience and acting talents of Michael Beckford as Ralph Sheldrake the former army buddy turned TV Executive, who brought his own special mark to the role.

In the Movie the role of Housekeeper Martha Watson is somewhat of a peripheral but important character. Not so in this musical. It is more expansive and it needs to be filled by a big persona. Step forward Anna Maria McCloskey. The part was ideally suited to her talents. She filled it perfectly and brought all her comedic ability to the fore.

I have reviewed a number of shows in which Caitlin Bannister has starred, and for one so young I am never ceased to be amazed at her stage presence and prowess. Once more, as Granddaughter Susan Waverly, she was a treat to watch and has a bright future.

Last but not least it was good to see Fred Piggford put aside his Noda administrative duties and tread the boards again, this time as retired General Henry Waverly. It was nice to see that old actor (sorry) acting sparkle. Well done, and well done Fatfield.